Devin Booker has always had a winning smile.

He’s been having a season to match this year in leading the Phoenix Suns back to the playoffs for the first time since 2010.

So it seems only appropriate Booker, as part of his Starting Five initiative, has teamed up with Suns team dentist Dr. John Badolato of Studio B Smiles to support Special Olympics Arizona by providing up to $250,000 in free dental care “to local athletes in need” for the next 10 years.

“Devin Booker has made so many Phoenix Suns fans smile this year,” said Dr. Badolato, also known as ‘Dr B’ in a news release as he’s also the official team dentist for the Arizona Diamondbacks. “Now you can help him make many more local athletes in need have happier and healthier smiles, too.”

With a clever play of words off Booker’s last name, every new patient who says “BOOK it” when they schedule or “BOOK” an appointment at either of Studio B Smiles offices in Scottsdale and downtown Phoenix, Dr. Badolato will donate needed dental care for local Special Olympic athletes in need.

Studio B Smiles has been a supporter of Phoenix Suns Charities, Make A Wish Foundation, Pujols Family Foundation and Banner Health Foundation of Arizona.

Special Olympics Arizona was part of the first class of recipients of Arizona nonprofits along with Leukemia and Lymphoma Society, Southwest Autism Research and Resource Center, UMOM New Day Centers and Ability 360. as they each received $100,000 grants in 2019. 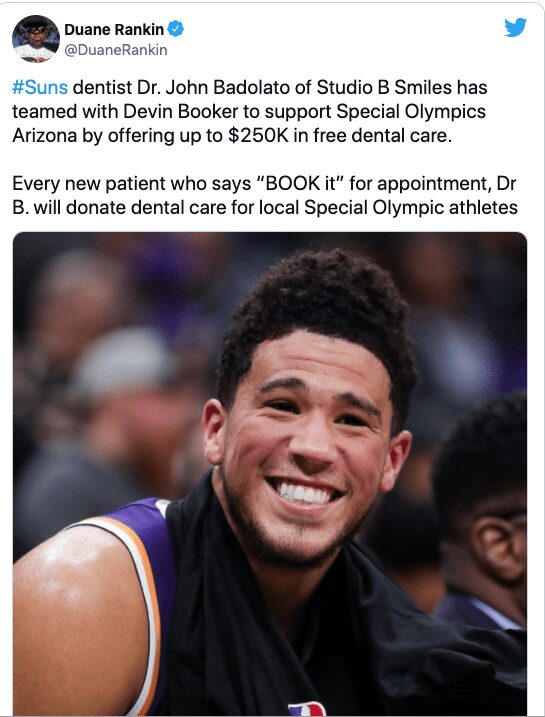