Special Olympics announced Major League Baseball All-Stars Gleyber Torres and Willson Contreras join the ranks as Special Olympics Global Ambassadors. They mark the first MLB players to become Global Ambassadors of the movement. Both young baseball stars hail from Venezuela and are bilingual, positioning them to build bridges of inclusion for people with intellectual disabilities that span the Americas.

“Gleyber and Willson’s dedication to their sport translates to their endeavors both on and off the field,” said Special Olympics North America President Tony Wyllie. “We look forward to partnering with them to promote the inclusion movement in North America, Latin America and around the world.”

“Gleyber Torres and Willson Contreras deepen the bench of Special Olympics Global Ambassadors who can truly transcend borders,” said Special Olympics Latin America President Claudia Echeverry. “Their recognition and reputations throughout the Americas are unmatched and having these powerhouses of baseball on our team will connect our global movement across languages, across continents, and across real and perceived barriers.”

Gleyber Torres
Gleyber Torres, two-time MLB All-Star New York Yankees shortstop has been quick to get involved in the team’s philanthropic endeavors and is an advocate for health, wellness and fitness. While this marks Torres’s introduction to Special Olympics, he is no stranger to giving back. Earlier this year, Torres was a recipient of the Thurman Munson Award, an honor annually presented to players who inspire others with their performance on and off the field. Torres was honored for donating his time to helping Spanish-speaking students in New York Public Schools learn English and visiting with numerous children receiving cancer treatments.

“I couldn’t imagine a greater honor than being welcomed into the Special Olympics family as a Global Ambassador, Torres said. “I am excited to hit the ground running and lend my platform to Special Olympics athletes to spread inclusion for people with intellectual disabilities in New York, Florida, Latin America and beyond.”

Since making his MLB debut in April 2018, Torres has made the All-Star team twice, the third Yankee in history to do so before turning 23. With 65 career home runs, he has hit more than any middle infielder in MLB history through their first two seasons.

Willson Contreras
Willson Contreras, two-time MLB All-Star Chicago Cubs catcher, is passionate about supporting people with intellectual disabilities and is driven by his cousin with Down syndrome in Venezuela. Contreras is already a fixture with Special Olympics Illinois, recently serving as the celebrity ambassador for the Windy City Rubber Ducky Derby, an annual race that typically draws thousands of spectators to watch yellow rubber ducks race down the Chicago River, which was held virtually in August of 2020.

“Family is one of the most important things to me. I saw first-hand the struggles my younger cousin with Down syndrome faced every single day. Engaging with Special Olympics athletes and supporting the inclusion movement has been a highlight during my time in Chicago,” Contreras said. “I’m excited to continue my work with Special Olympics Illinois while increasing my involvement nationally and internationally.”

As part of the 2016 World Series winning team with the Chicago Cubs, Contreras is one of the few big leaguers to hit a home run during his first MLB at bat. Like Torres, he is also a two-time All-Star in his young career. 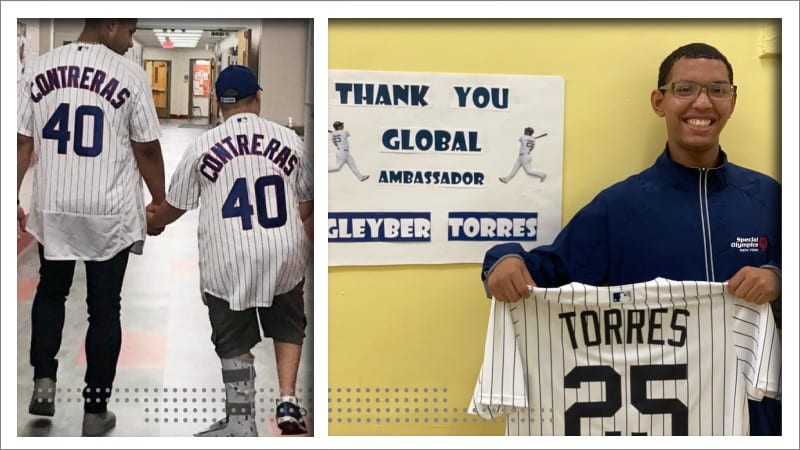